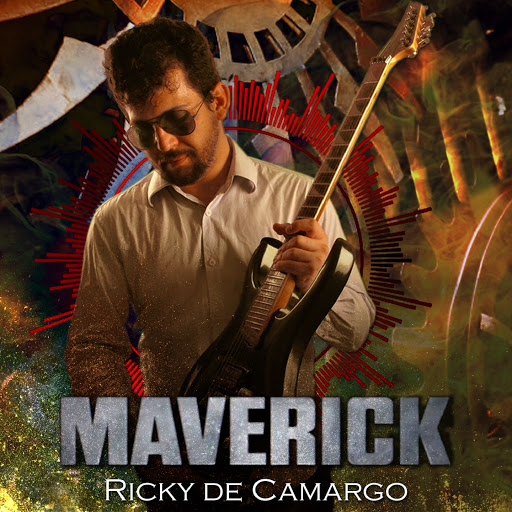 This will be Ricky's second Instrumental Solo Album. In this record, Ricky bring us the same concept of rock, prog rock and many guitar lines. Everything very well mixed with orchestral arrangements. The album has 7 Instrumental Tracks. All writen and arranged by Ricky in his studio. The record process took around 3 months from start to finish.

Ricky played, programed and recorded all the guitars, bass, drums, keyboards, synths solos and orchestral arrangements. A truly one man band project. In this album, Ricky put all the best songs that came up during the pre-production. Making a perfect balanced record.

The opening track "Maverick" it's a orchestral/prog-metal tune that it's divided in two parts. The first one it's more metal and direct. The second half give us the taste of prog-metal, with odd time signatures, dark riffs that switchs during all the second part, meanwhile synths solos runs during the next two minutes.

The next track "Lifestream" it's a ballad in Dm (Re minor). It's a track about overcome depression and keep going.

The third track "Sunrise in your Eyes" was recorded in honor of the Asians. People that Ricky has the greatest respect and admiration.

"Full Throttle, the fourth track, is a more direct rock song on the album. It is about doing the best you can in what you do in this life.

"The Angel's Choir", it's the fifth track from album. It's a more Gospel tune, with several choirs arrangements and several time signatures changes. 11/8, 7/8 and 8/8 to be more precisely. Ricky also wrote the Synth Solo that we have in this one.

The sixth track from "Maverick" it's "Twilight". A track that Ricky wrote many years ago.
According to ricky, he always tried to improve his guitar technique in front of his house watching the sunset.
That was the inspiration for the track.

The last song on the album is "Shadows Will Fade Someday". A complete song from the orchestra with many changes of tones.
To complete the album, Ricky wanted to have a song that would challenge him technically and theoretically, in terms of composition.
Then, after days and days of composing, he finally achieved a harmony that fulfilled the requirements he intended for this song.

DeFox Records and Heart Of Steel Records are thrilling to announce the metal warriors called LECHER their   d ebut album it's entitled  "Castle Of Hallucinations" . The release date is September 30th. The digital album will be launched on every worldwide webstores, iTunes, Amazon, Spotify, Deezer, Google Play, Tidal, Shazam...YouTube Music also. Lecher from Sorocaba, Sao Paolo, Brazil were born in 2007, originally the band was formed by Diego Alquezar and Sergio Willian, the intention is to play the aggressive and direct Heavy Metal, with technique and heart. After several changes of the line-up, joined the band Marcelo '' Zé Bolha '' Machado (formerly Alcoholikiller, Skyrunner) and Juliano Costa (formerly -Prepared to Kill and Warshipper). Rodolfo Nekathor (ex-Zoltar, Lost Graveyard) joined the band in 2009, reinforcing the band that is now ready. After a trial period, Rodolfo Nekathor and Sergio Willian left the Lecher and Juliano Costa took do
Posta un commento
Read more...»

DeFox Records and Heart Of Steel Records are pleased to announce the release of BLACK CAVE , a musical project from Brazil combines wild traditional early Metal with NWOBHM from the 80s. The product titled "Caveman" that contains twelve tracks played entirely by Paulo Destroyyer and sung in English will be launched on the digital market on May 1st and will be distributed in major stores such as iTunes, Amazon, Spotify, Deezer, Google Music, Youtube Music and many others. Paulo Destroyyer Maia is a singer and musician based in Petrópolis, a popular Brazilian vacation destination in the Rio de Janeiro region, the visceral love for classic metal rock led him in a recent past with Abomination Wide, a trio that debuted worldwide in 2016 with Invincible Records that launched on the market the EP entitled "Hypocrites Must Die" containing five songs dedicated to a ferocious thrash and death metal. The new artistic project BLACK CAVE proposes Paulo Destroyyer
Posta un commento
Read more...»

We are a european MUSIC BLOG-ZINE that supporting the web music community, You can contribute with a small donation